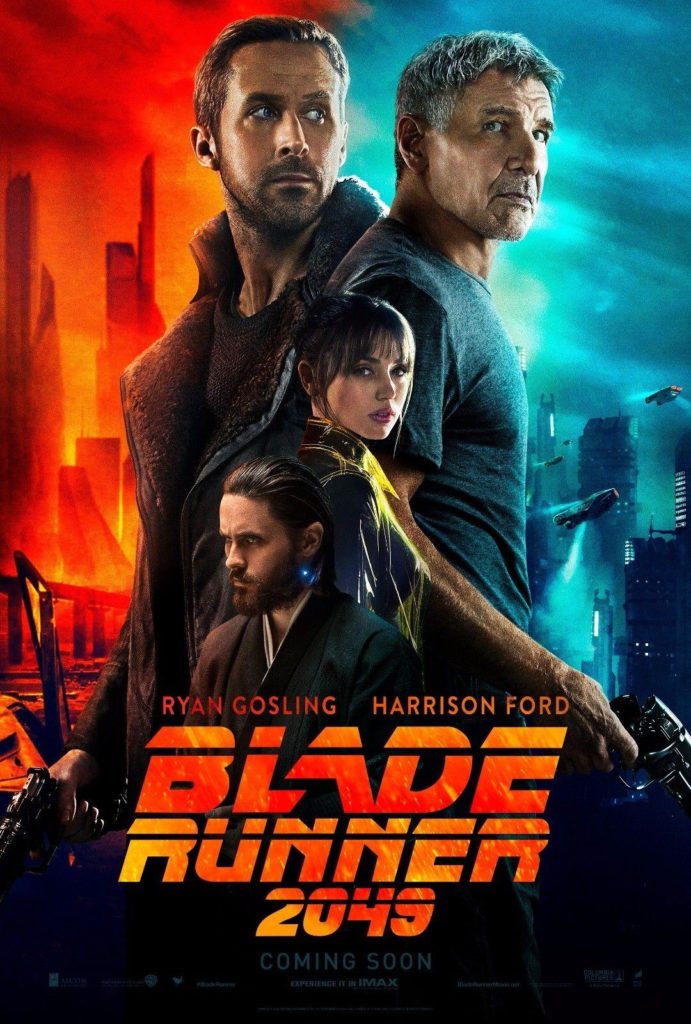 When I first heard of this project, I thought my usual sequel / prequel thought, Hollywood’s after my wallet again! and instantly put up my guard. I’m not alone. Many fans of classic films and amazing single title outings go directly into resist mode, and given some of the train-wrecks we’ve experience, can you blame us?

Typically I’m on the other side of fandom. The take my money side. Though I worried that they were be bad, I was there for Transformers, Turtles, and Ghostbusters. Admittedly, I was happy with these franchises staring back up and liked bits of all the movies; even felt Ghostbusters was entertaining.

However, Hollywood has reached into my pocket too often and Bladerunner (like Big Trouble in Little China) has a special place in my mind. So, I slapped Hollywood’s grubby hands away from my wallet and waited for reactions.

The first wave of fan-friends who saw it opening night raved. Good enough for me. I went.

After the viewing, I thought, Wow, I felt that world. To me, it totally shattered any preexisting atmospheric record and connected perfectly with the old Blade Runner feel. There wasn’t any hyper changes from the original (like, say, podracing); just more of the same. Wait. Not just more of the same, but more depth in the same world.

The 2049 world felt like it evolved form the original Bladerunner and things weren’t too vastly different. Sure there were more invasive ads, but we’re experiencing that now. The overpopulation was almost forever present and street vending remained the main source way to attain food.

I thoroughly enjoyed the world. And the tone.

The story told in the world, meh. I know some of my friends are screaming WHAT?!

At the time, I couldn’t quite put my finger on why. I enjoyed the experience and wanted to see it again to get that immersive feel, but didn’t. Something was off and I couldn’t tell what.

Now, I think it has to do with the main character; K. Maybe it was knowing that he was a replicant from the beginning, maybe because it felt like he was doing his job reluctantly instead of it driving him, maybe it was his buy-in on his entirely virtual girlfriend. I get why that last one is an important story element, but it smacked of this guy is a victim of his world.

I think that’s what bothered me at a subconscious level. This guy was suffering, but his suffering didn’t drive him to improve his life or make the world better. He had relented to it. You know, just getting by, and while that might be the way that many folks live their lives, it’s not the kind of life I want to pay money to see (a second time).

In fact, almost every other character in the movie was more compelling than K. The bad guy, his lieutenant, K’s boss, even the memory makers. All of them were more active in their own lives than K.

And that’s where I think this movie failed me. It was very much a continuation of the world quite good in my opinion, but not the kind of good that will get me to buy a second ticket or own it on Blu-Ray. Further, is a friend said, “Let’s go see 2049. My treat.” I’d probably asked, “What else is playing?”

A writer-friend gave her stamp of approval to this movie that would’ve missed my radar. I took a look at the preview and closed the window in the first few seconds. FYI, that’s a good thing. I’m not a big fan of watching previews because they can spoil the movie for me. (Too much to get into here.) I relayed that I planned to go see it within the week, and she expressed curiosity as to what I thought. This preamble is to say that this movie/story breakdown was written to fulfill her request.

So, the ‘this week’ turned into next week which is now this week. Anyhow was finally able to make the time to see Arrival. It was quite cerebral, and I enjoyed it.

As a fan of non-linear storytelling, the opening line clued me in and I was glad to have gone for the ride. There were parts that I felt were a bit longish, but–purely–that came from wanting to get to the (presumed) payoff.

That said, since you inquired about what I thought; here it is. When it comes to movies that encourage thinking, I tend to. I had a: really dig, two didn’t like, one would’ve been nice, and one hold-on (which is a super nit).

I really dug The Heroine telling her kangaroo story. It spoke volumes about the character and her understanding of the type of people she was dealing with. And her coming clean to The Scientist to address the slice of the audience who’d say, “That’s not right” was right on point.

I didn’t like my spacial awareness saying, that if they were going up on a lift and jumped to get onto the wall, they should be walking up a wall in the alien chamber which, effectively, would’ve been the new floor. And the same would hold true for any of the other walls they could’ve jumped on to from the lift. Though gravity was control in the alien ship, I was very aware that I was watching a movie when they did the walking on the ceiling bit. [“It’ll be a cool effect” I hear ya Hollywood.] They would’ve had to make a turn to be on a horizontal surface of any sort. [“I said ‘cool effect,’ bro.” Sorry Hollywood. I get it.] I actually needed the extra time they took to set up the equipment, so that I could have that little fight in my head and tell myself, “Shut up, and watch.”

I didn’t like The Father as being to have said that The Heroine had made the ‘wrong’ choice. With The Heroine’s ability, I could see her not going the distance with any semi d-bag dude. However once I knew The Father was The Scientist, I thought about the times when The Scientist showed an appreciation for the moment. Yes, for the story to work, I get why it was said and why they weren’t together, but it didn’t sound like The Scientist character.

It would’ve been nice if The General would’ve taken ten seconds to ask The Heroine a word definition from the other linguistics candidate. (She would’ve knocked it out of the park, of course.) But knowing the definition to a word you propose as a test doesn’t cinch it for me, particularly when The General asked her what it meant. [“Save on time!” I hear ya’ Hollywood.]

Hold-on! Did we just time travel? Did we miss the scene where she met Big Domino in an alternate future where things didn’t work out with the aliens and she asked, “What could I have said to change your mind?” And he replied with, something seemingly outlandish like, “Calling me on my personal cell during the stand off and telling me my wife’s dying words where were (strings of Manderin).” She’d then get his number in the same scene or from a thrown-out note that was scratched while she was translating his phone call. Then, that timeline being erased when she told him those words and then being befuddle about knowing what to say. Or. Or! Did she originally read the words in Big Domino’s biography in the future so that she’d know what to say the first time?

To me, there’s an unresolved loop there. A real missed chance by Hollywood to make an elegant time-line-sensitive solution. Because {pardon me while I adjust my geek-hat}, even if she knew her entire life, there wouldn’t have been a moment in the future for him to tell her his wife’s dying words if she wasn’t somehow successful in the first place. I get what they cemented with the Non-Zero Sum Game. Once she knew information, she could apply it to any point in her life, but that party meeting with Big Domino wouldn’t have happened without an alternate alien success of some sort (doesn’t have to be another timeline) in the first place.

Even with the Hold On and Didn’t Likes, I still enjoyed the story, the storytelling, The Heroine’s arc, decisions, and sympathized for her coming battles. More so, I thoroughly enjoyed the near complete emersion into the film [I’m looking at you cool effect]. It’s not a pay-for-a-second-viewing-in-the-theater for me, but I will watch it again when it comes out to see if I can minimize my Didn’t Likes and possibly tear apart my Hold On.

Talk about an excellent (and really fun) movie! Several of my friends raved about this adaption, a couple even paid to see it in 3D on subsequent visits.

Then, the stars aligned and I finally got a chance to go see what had everyone talking…

Man, oh man, I can’t wait for this to come out on disc so I can add it to my home library! Since it’s still in the theaters, and I’m not one for possibly spoiling a movie, I’ll simply echo the encouragement to go see this movie before it’s out of the theaters.

(I have drafted a review. It will be posted once the movie is released for home consumption and I get a chance to watch it again to see if I missed anything worth raving about.)